Some snapshots of flags flying at Caledonia. Yes, that is a maple leaf with its centre cut out, and yes, that is a Palestinian flag. 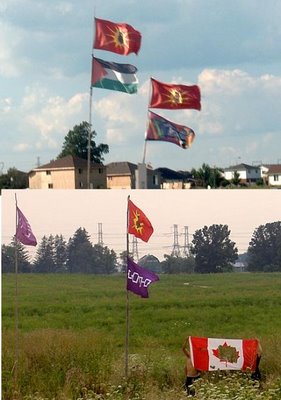 From CTV.ca, reporting on the exchanges between residents and protestors last night:

But [local mayor] Trainer said residents were already angry as aboriginals had thrown rocks earlier at the home of an 89-year-old man whose house borders the occupied land.