Coming soon to a newstand near you.

... after all, this can't go without competition. 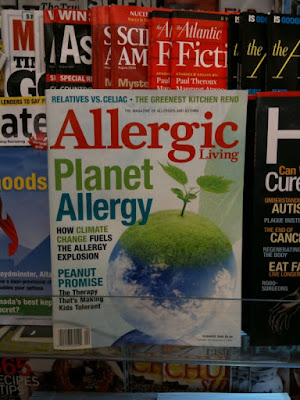 To: All Canadian Politicians, Media and Chattering Classes

Subject: Please Shut The F--k Up About The Nortel-Ericsson Deal

Dear Frothing At The Mouth Protectionists,

Please note the following reasons you should shut up now about the Nortel - Ericsson sale and let Ericsson get on with saving what's left of Nortel's Carrier Networks business.

Now, here's what you should be talking about, calling your MP about and protesting about.

Become educated about this issue, and please visit http://tinyurl.com/ChangeCCAAPetition. You'd be doing yourself and all Canadians much more of a favour. Unless you'd rather spend your time putting a bunch more Nortel workers out of a job and getting shafted with the bill again.

Please do what you can to right the real wrongs of this situation. Corgis don't have opposable thumbs, so we're counting on you.

Can Self-Assembly LTE Equipment Be Far Behind?

Ericsson (NASDAQ:ERIC) has today entered into an asset purchase agreement to acquire the parts of the Carrier Networks division of Nortel relating to CDMA and LTE technology in North America.

and one lousy one:

USDA officials should be a little red-faced today, after it was disclosed that they paid almost twice the going rate for packaged ham that is supposedly a part of the administration's economic stimulus package.

Rumours that the supplier, Clougherty Packaging, was recommended as the Obama Administration's principal pork supplier by a Mr. Warren Kinsella are wholly unfounded.
Posted by Clive at 10:24 PM

[This post somehow didn't make it to TDPC at the time; we were a little fogged by losing two dogs just a month apart, as well as the Nortel layoff without notice or severance. Here's what should have been published back in April.]

Just a month ago we sent Angie to the Rainbow Bridge. We still miss her daily and so it seems doubly hard that today I have the sad news that another of our corgis has gone to join her. Cymry’s Little Minister (Deacon) was put to sleep yesterday. Two days ago he seemed to be his normal self, and then he suddenly stopped eating or showing interest in life. The vet found an enormous tumor in his abdomen and with no prospect of recovery we had to make the hardest decision of a dog’s life, again.

Deacon was nine years old, our only Pembroke corgi, and had been with us for about four years. We’d dropped Angie at a boarding kennel and clearly appeared to be such a corgi-crazed couple that the breeder there suggested we might like to help her re-home Deacon, now retired from the show ring. We said we would talk it over during our vacation – but Erika decided we should call from the road about an hour later to say yes, we’d take him.

In the show ring Deacon excelled – he won multiple Best In Show titles, and he loved to show – or even just be in among the tents and trailers and ex-pens at a show. But although he loved that life, he adjusted to life in a family home (with a young child) very quickly and became a wonderful family dog.

Deacon had luxuriant golden hair, with a mass of colours – more golds, yellows and browns than you knew existed. In sunshine he was radiant. In the rain... well, he wouldn’t go out in the rain. His was a coat you could bury your hands and face in – he loved hugs and especially loved it when the children would put their arms around his neck and snuggle into him. He did have a distinctive aroma of old couch, which could be very comforting when we were feeling down.

Always friendly, he would occasionally growl at younger dogs to let them know who was boss – but he never went to the trouble of actually getting up to do anything about it. While younger Cardis ran around him imitating whirlwinds, Deacon preferred to imitate a hearthrug and did so with dedication, skill and great dignity.

At one time we had a younger male Pembroke, Madoc, staying with us. Deacon tolerated him for a while, but then suddenly became incredibly protective of Erika and wouldn’t let Madoc near her. This culminated in a great fight one night and we had to send Madoc back home. Two weeks later, ClearBlue confirmed what Deacon had obviously detected that night – that Erika was pregnant and our son was on his way.

Deacon was terrified of chickens, so we hope that there is a separate area reserved for fowl at the Bridge. He loved to roll in fresh grass clippings, and always looked forward to the first mowing of springtime. It will be hard to roll out the tractor without him there.

Faithful friend, old soul, glorious show victor, comforter, food vacuum and perennial fake-grumpy old man: we all love you always, and you leave a hole here that can never be filled. Be happy, stay dry and find a nice warm fire up there – and take care of Angie when she comes in from her stick fetching. 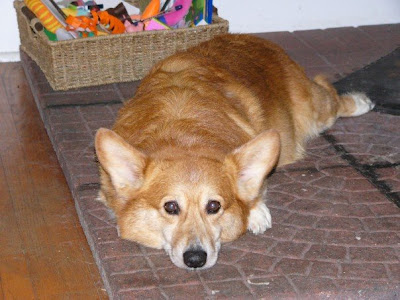 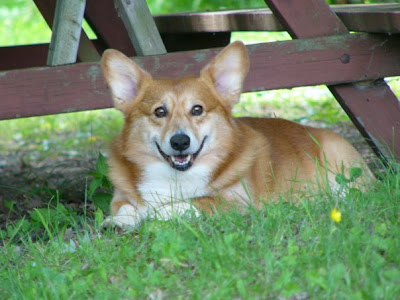 This WTF Moment Brought To You By

Jerome Glenn, director of the Millennium Project and one of the report's authors, said: "There are answers to our global challenges, but decisions are still not being made on the scale necessary to address them. Three great transitions would help both the world economy and its natural environment – to shift as much as possible from freshwater agriculture to saltwater agriculture; produce healthier meat without the need to grow animals; and replace gasoline cars with electric cars." (Emphasis mine).

The corgis are anxiously awaiting their first non-animal meat sausages.
Posted by Clive at 10:26 AM

A Guide To Catholic Etiquette

Here then, as a public service, is a short instructional video:

Hif Majefty if expected to begin hif tide reduction program immediately, by the placement of hif throne by the fhore, when hif fupreme and regal greatneff will caufe the tide to be ftayed.
Posted by Clive at 8:38 PM

The Catholic Church: An Apology

In recent years we may have given readers the impression that the Catholic Church is nothing but a massively wealthy, quasi-criminal organization that is responsible for AIDS, earthquakes, famine, the oppression of women and global warming. We may further have described the Church as a haven for pedophiles and an object worthy of ridicule by all right thinking people.

We now realise that the Catholic Church is in fact a noble institution, whose sacred symbols are worthy of the utmost respect, and we call for the miserable Prime Minister of Canada to be brought before the Church's Inquisitors without delay.

When the US fires a drone at militants in Pakistan, the CBC reports that a "US Missile Strike Kills 28". When 156 people are murdered by a mob of Uighur muslims in China, that's a "clash between Han Chinese and Uighurs".

Must be hard to live with that anti-muslim bias in the media, eh?
Posted by Clive at 10:38 AM

Pope Benedict Must Have Missed The Memo

... Gene Robinson, the openly gay Episcopal Bishop of New Hampshire, says that a church that does not ordain women or openly gay people can have no future.

Way to go, Gene. Will you tell Benedict XVI or shall I?

I'm not a betting man, but if I had to lay odds between the future of the Catholic church and that of ECUSA, I wouldn't be favoring the latter.
Posted by Clive at 3:29 PM