Pat 'Skywalker' Martin MP, I Am Your Father

In a story in today's Ottawa Citizen, (subscriber only) NDP MP Pat Martin complains that the Chevy Tahoe SUVs now being used in the Prime Minister's motorcade are like something 'Darth Vader would drive'. As a service to readers, then, here is a quick way to tell the two leaders apart. 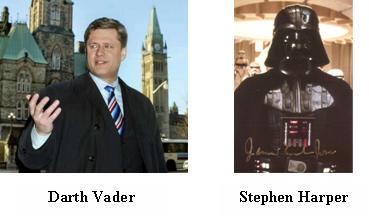 The Citizen article doubles up the comparisons, with the now obligatory mention of George W. Bush (yawn). Let's take a moment, shall we, and recall just how effective this tactic was during the election campaign. How's that working for ya, Pat?

As a taxpayer and elector, I'm glad Mr. Martin has time on his hands for this kind of thing. I'd hate to think we sent him to the Hill to be overworked. It's nice that despite the many pressing and important issues that he is doubtless working on for his constituents he still has the opportunity to play the fool like this.

Now that we've all had our fun, let's get into some facts:

The vehicles are chosen, purchased, owned and operated by the RCMP, with no political influence. If the Tahoes resemble the Presidential motorcade, perhaps that's because the RCMP is modelling some of their approach on that of one of the most effective security forces in the world. It's just my hunch, of course, but I think a big ol' Chevy might just be a little more effective at heading off a suicide bomber than, say, a Smart. Perhaps unlike Pat Martin, I'm all for anything that stops my Prime Minister being shot or bombed.

Reader tips on Pat Martin's personal choice of transportation would be welcomed.