In these days of interwebnet connectedness, it's probably a good idea for anyone standing in an election to check out their Google profile.

This weekend I was at a local event where the Ontario Liberal candidate for Leeds-Grenville, Lori Bryden was also present. I didn't get to speak to Ms. Bryden, so she escaped questions about the health-tax that has yielded no improvement in rural healthcare, the slush fund for liberal friendly groups or the sudden and miraculous appearance of a $2 billion surplus just prior to the election (isn't that what the health-tax raises??)

Anyway, realising I didn't know anything about Ms. Bryden, I naturally turned to Google. You'd expect a candidate's official website, or the party site, to come out top - certainly I'm sure that's what Ms. Bryden would want to happen. Sadly, however, the top link concerns a dispute between Ms. Bryden and her husband Rick and Tarion, Ontario's provider of new home warranties. 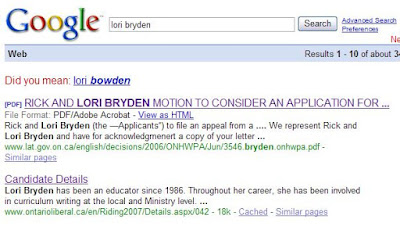 Reading the decision at the link in question, it seems that the Brydens are in some dispute with the builder of their new Westport home; obviously the ins and outs are their business, but the decision does reveal that the Brydens had paid the builder only $75,000 for $100,000 of work and yet were still claiming some form of loss. This is an example of Liberal math at its finest, and is a definite sign that Ms. Bryden should have a place in cabinet if McShifty and his crew do retain power come October.

Even so, someone at Lib HQ might want to fix the Google situation.
Posted by Clive at 11:31 AM