Income Splitting : The Time Has Come

As promised, some reflections on the recent Parliament Hill meeting on income-splitting, arranged by Sara Landriault, Beverley Smith and Garth Turner. This was the first time I'd been on Parliament Hill - first impressions were of a building that inherently demands respect - corridors and hallways with imposing wooden doors that caused everyone to speak in hushed tones as they walked or huddled. I could see where the expression 'corridors of power' came from, although the corridor in question was more a corridor of the opposition, to judge by the MP's names on the doors I passed.

Anyway, after 40 minutes or so of scrambling to find a large enough room, things got underway with an introduction by Garth Turner. He spoke of income-splitting as an idea whose time has come; he introduced the various MPs who were in attendance at the meeting at that point and also highlighted that both Finance Minister Jim Flaherty and Senate leader Marjory Lebreton had staffed the meeting.

Sara Landriault gave a brief introduction, then Beverley Smith spoke, about her long-time fight for recognition of unpaid labour. She pointed out how in the past families and households comprised true partnerships in which all roles were valued, but with the introduction of a money-based economy there has been a progressive devaluation of the roles of caregiver, parent, etc. - roles traditionally filled by women. Much of the work that women perform therefore goes unpaid, unvalued and unrecognized. Income-splitting would for the first time place a value on this work. She also pointed out that the equivalent-to-spouse tax credit, which was perhaps intended to address this, has fallen from around 1/3 of an average income to 1/7. In addition, of course, this credit still treats women as 'dependents' rather than according them the respect they deserve.

The Financial Panel followed, with presentations by Dr. David Murell of UNB, John Williamson of the CTF and Dr. Philip Merrigan of UQAM. David Murell highlighted the inequity built into the current tax system and how income-splitting would restore equity. He also pointed out the severe decline in population that Canada can expect to experience as couples put off having children later and later - or in many cases decide against altogether. This is particularly a problem in rural Canada. Against the argument that income-splitting is a regressive tax measure, he showed how an alternative scheme could be implemented that would cap the income-splitting benefit for the top tier of earners, and redistribute the money saved to the lower income brackets. This would enable the measure to be implemented while retaining a progressive tax system. 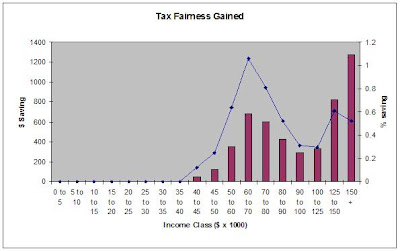 John Williamson gave a polished presentation, highlighting the fact that the top 10% of earners in Canada pay for 50% of the country. That, by anybody's interpretation has to be considered a pretty progressive (I would say punitive) tax system. That 10% begins, not at $200,000... or $150,000... or at $100,000. No, if you make $64,500 or more, you're in the richest 10% of all Canadians and your tax burder, on average, is equivalent to that of 9 lower income Canadians. Only 2% of Canadians make more than $100,000 a year. Against the argument that income-splitting gives a bigger benefit to the wealthier, he showed how, although absolute dollars might be greater, the largest percentage benefit is gained by middle-income families.

Philip Merrigan gave a highly informative presentation on the French model of family taxation, after which I think most of us would have moved to France at the drop of a hat. There, a family splits income according to the quotient familiale. A couple count as one part each. The first two children count as 1/2 part each and the third child as another full part. Income is split for tax purposes among the parts; therefore a family with three children splits their income four ways before tax. The idea (and result) is that families enjoy a similar standard of living regardless of whether they have children or not - and France is the only country in the western world with a birthrate sufficient to maintain its population. He also introduced me to the terms 'vertical' and 'horizontal' in relation to taxation equity. Vertical equity relates to the progressive model - those who earn more pay a greater proportion of taxes. This is where Canada's tax policy is focused. Horizontal equity refers to the idea of like earners paying like taxes - and this has been neglected in Canada in favour of a blind pursuit of vertical equity.

As examples, he showed how much benefit various families in Quebec derive from government transfers. A family earning $15,000 a year receives government benefits worth approximately $23,000. A family earning $100,000 a year receives $3,000 while paying $40,000 in taxes. The progressive model has the one family completely subsidising the life of the other.

The next panel was the caregivers panel, which opened my eyes to the various other scenarios in which income splitting would support families. Frank Toft spoke of the needs of parents caring for disabled adult children; Caroline Tapp-McDougall spoke of the needs of those caring for elders or sick family members. In all these scenarios, when someone has to give up work and give up income to care for someone in their family, income-splitting would support and above all, value, that caregiving work.

In the Political Panel, Elizabeth May spoke of the Green Party's interest in income-splitting as a tool to support the family, which they see as a fundamental pillar of society. It is government's role to create conditions that support families - income-splitting is one measure that can relieve the stress that families face today. Law school teacher Rebecca Bromwich described how divorce law has finally recognized the value of unpaid caregiving work - it's time for the rest of the legal system to catch up

The day was very enjoyable and informative. For me, it opened my eyes to so many benefits of income-splitting that take the debate way beyond the 'mommy-wars' that it's been hyped as. Income-splitting is about equal treatment for equal households. It's about valuing caregiving and other unpaid labour. It's about respecting and valuing women. It's about supporting all caregiving choices for children, the elderly, the sick and the disabled.

Income-splitting: It's about time.
Posted by Clive at 10:23 PM