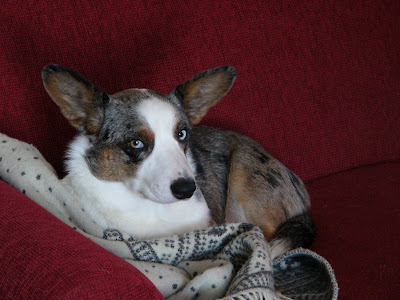 It is with great sadness that I return to blogging after a lapse of several months, only to bring bad news to fans of TDPC. The corgi that started it all, the first of our dogs, the inspiration behind so much of what happens here at TDPC HQ, has died.

Angie was a blue merle Cardigan Welsh Corgi with personality plus. She was larger than life, certainly larger than her corgi legs might have appeared, always the centre of attention, friend, companion, joker, nanny and pest in roughly equal measures.

Angie was our first dog and we spent hours researching, planning, preparing and learning - then when she arrived, she pretty much threw the books out of the window herself. She always did everything her own way; at puppy school she earned top place, but at the same time while other dogs in the class would barrel toward their people when called, Angie would always perfectly obey the 'come' but at a nice sedate walk. She would chase and fetch a stick for hours on end - but it had to be one that was at least as long as she was. She wouldn't move for anything less than a small tree. Running across the yard she looked like an airplane, with a good two feet of stick on either side of the huge corgi grin.

Angie was a child substitute puppy for a couple married 12 years - whether it was her doing or not, our daughter was born when Angie was just over a year old. Worried how an only dog might take to the usurper, again we prepared and researched. Angie had her own plans as always and from the moment the baby arrived until the day she left us, Angie was nanny, policewoman and protector first of my daughter and then my son as well. She was the leader of the household as grew to four corgis and the two children - always in charge and always smiling.

Angie had a wonderful sense of timing, never better than on the night soon after my son was born. About a week earlier she'd had her first run-in with a skunk. We'd delicately washed her with peroxide and Dawn, and finally got things a little under control. But on the fateful night, I'd been in to the hospital to pick up my wife and new son - only to discover that the staff wanted to keep them another 24 hours. So I'd arrived back home at around 11pm on a cold November night, with a distraught two year old whose mommy wasn't coming home after all. I'd opened the door to let the dogs out, taken my coat off, and gone to call them back in. Angie trotted up, all smiles, but surrounded by a wall of the unmistakeable aroma... again. The peroxide bath she had in the small hours of that morning was not so gentle as the previous one. She never messed with skunks again.


She had strong opinions on many topics, and in particular home decor. She was so unhappy with the Ikea furnishings when she moved in that in due course she managed to eat enough of the couch as to render it unuseable. No mean feat for a 35lb dog.

She loved walking by the Rideau but preferred not to come into contact with it. When the canal achieved designation as a World Heritage Site, I think she felt that she had finally been accorded some of the recognition that was due to her.


It seems odd that a house with two young children and three corgis could feel empty, but our home is very empty tonight. God speed, faithful friend, teacher, comic and heart dog.